Currently, domestic LPG prices vary from state to state, and are reviewed every month

LPG Cylinder Price: LPG or liquefied petroleum gas prices have remained nearly unchanged in metros this month. In Delhi and Mumbai each, the price of Indane brand non-subsidised LPG remained at Rs 594 per cylinder with effect from August 1, according to state-run Indian Oil Corporation, the country’s largest fuel retailer. Currently, domestic LPG prices vary from state to state, based on factors such as crude oil and foreign exchange rates. In the past two months, cooking gas prices were increased marginally.

Here’s how the price of non-subsidised LPG has changed over the past few months: 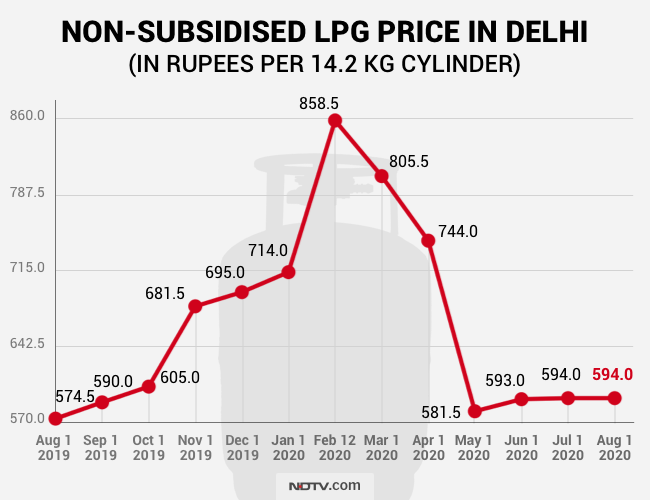 (Currently, the price of non-subsidised LPG in the national capital is nearly 31 per cent lower compared to the year’s highest level recorded in February so far this year)

Currently, the government provides subsidy on 12 cylinders of 14.2 kilograms each per household per year. Customer have to pay market rates for any additional cylinders.

The government pays the subsidy directly in the accounts of consumers, based on the annual quota of 12 refills. The amount of subsidy is revised from time to time.

Crude oil prices lost about 1 per cent on Friday. Global benchmark Brent futures closed 1.2 per cent lower at $44.35 per barrel.